Why Research By Undergraduates is Important For Science and Students

Why Research By Undergraduates is Important For Science and Students

Be Sure to Maintain Your Federal Student Aid Eligibility

The Limited Usefulness of Moral Codes for Ethical Behavior (Part I)

Over at Inside Higher Ed, two chemists, David S. Rovnyak and George C. Shields, have an article titled “How Undergraduate Research Drives Science Forward” about the many contributions made by undergraduate student researchers. This is highly relevant to my interests, as one of the many hats I wear is Director of the Undergraduate Research program at Union College. I’ve spent quite a bit of my time as a small college faculty member working with undergraduate students on a wide range of research projects, so this is obviously something I value highly.

Rovnyak and Shields direct their piece mostly at the misconception that research with undergraduates isn’t “real” research, a particularly grating variant of the idea that only top research institutions matter when it comes to science. This leads some scientists to downgrade and disparage work by faculty at undergraduate institutions, including giving poor reviews to their grant proposals and jeopardizing their funding.

The idea that undergraduate institutions are inherently lesser is a pernicious myth, as the examples of high-impact publications from undergraduates provided in that piece amply demonstrate. Rovnyak and Shields are chemists, so their examples are drawn primarily from that field (and their negative examples are exacerbated by the generally ruthless atmosphere in life-science research), but I can confirm that the same is true in physics.

Just within my own immediate area of physics, there are great examples of important work done by undergraduates. My colleague Tiku Majumder at Williams College (my alma mater, though we didn’t overlap there; he was hired after I graduated, because I’m old) has published a steady stream of papers on spectroscopy of transition metals, providing crucial experimental tests of atomic theory and inputs for exotic physics searches. More spectacularly, Dave Hall at Amherst has recent papers in Science and Nature on cutting-edge experiments to make analogues of magnetic monopoles in ultra-cold rubidium.

Going a little farther afield, I’ve written here about astronomers at Calvin College who made a splash with their prediction of an upcoming nova. And going back in history, one of the most important experiments in physics was partly an undergraduate project: Ernest Marsden was an undergraduate student working with Ernest Rutherford at Manchester in 1909, given the task of looking for large-angle deflections of alpha particles. This shouldn’t have been possible, but the Geiger-Marsden experiment ended up completely transforming our picture of the atom and laying important groundwork for the rise of quantum mechanics.

So, I absolutely agree with Rovnyak and Shields that research with undergraduate students at undergraduate institutions is just as important as research conducted at larger, more prestigious research universities. Undergraduates have made critical contributions to science and will continue to do so in the future.

At the same time, though, I think it’s important not to under-play the educational aspects of research projects for undergraduate students. The availability of research opportunities is a big part of why I highly recommend small colleges for science students, and as I can personally attest, these projects can often be life-changing experiences. 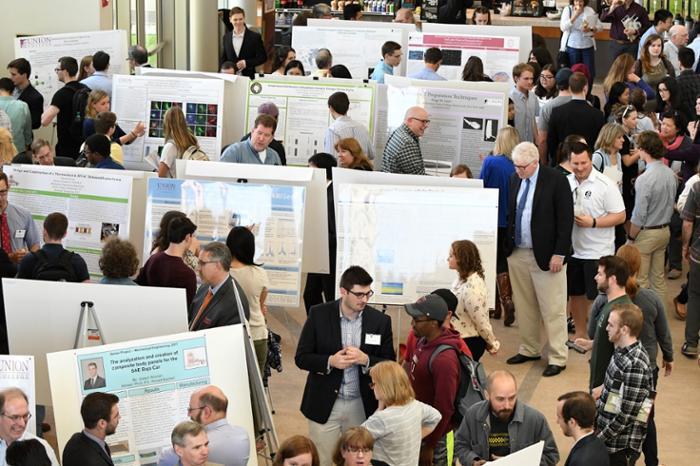 From a purely educational standpoint, there’s no better way to learn science than by doing science, which is why even huge introductory courses often have a laboratory component. Time and resource constraints often limit what can be explored in lab classes, though, while more open-ended research projects give students a much deeper experience, and develop hands-on lab skills in a way that’s difficult to do in a fixed class period. Research projects also often involve a presentation component — our summer research program features a seminar series in which students give talks, and every year, Union holds the Steinmetz Symposium, an all-day showcase for undergraduate research. These presentations help students develop writing and public speaking skills that will be essential no matter what future career they pursue.

More than that, though, research experiences can transform students’ conception of what science is, and their whole career trajectory. Research projects are fundamentally different than class work, and the experience of doing research can engage students in wholly different ways.

I’m fond of quoting a comment made by the aforementioned Tiku Majumder, who said that the hardest thing to teach a new research student is that “This is not a three-hour lab.” Real research projects are very different than lab exercises, and you usually don’t know going in that a particular procedure will work right away. Sometimes, you don’t even know that what you’re trying to do will ever work. When your first attempt fails, it’s not time to call in the professor and complain that the apparatus is broken; it’s time to figure out why it’s failing and find another way to get the result you’re after.

Research work demands a kind of tenacity and creativity that often isn’t fully engaged in classes and labs. Where many labs follow a procedure that’s either clearly laid out or relatively obvious, success in research often demands trying new approaches and clever work-arounds. It’s not unusual to find that students whose classroom performance is unexceptional really blossom when turned loose on a research project. In fact, a colleague in computer science once told me that he targets “B” students when recruiting for his research lab, because all too often, students who get A’s do so because they immediately see the right path to an answer, and thus are used to getting things right the first time. Students with good-but-not-great grades, on the other hand, are more accustomed to needing multiple attempts, false starts and blind alleys, and thus adapt more readily to the world of research.

And these experiences can transform students whole conception of their career tracks. As I said when I applied for my current directorship, I wouldn’t be where I am today without the experience of doing research as an undergrad. I did all right in my physics classes, but it was a pair of summer research jobs, after my freshman and sophomore years, that showed me that I really loved working in a physics lab. Based on that, I decided that my professors had a pretty awesome gig, and went off to grad school with the explicit goal of someday becoming a professor at a small liberal arts college.

(I told this to some students once, and after a pause, one said skeptically, “So, you’re….livin’ the dream?” One of the great things about working with undergrads is that you can count on them to provide maybe a bit more perspective than you really wanted…)

So, while I absolutely agree that undergraduate research is real science, and we should celebrate its accomplishments, I also think it’s important to remember that it has educational value even beyond the formal teaching of research and presentation skills. In the same way that many of the benefits of going to college come from outside the classroom, the benefits of research extend beyond articles published and grants won. The most important part of research as an undergraduate student is often the transformation of the student, and the things they’ll go on to do in the future.

This article was written by Chad Orzel from Forbes and was legally licensed through the NewsCred publisher network. Please direct all licensing questions to legal@newscred.com.

tags: featured higher education undergraduate research undergraduate students
previous This Woman's Name Appears on the Declaration of Independence. So Why Don't We Know Her Story?
next How to Determine if a Certificate or a Minor Is Best for You
Related Posts